When team members feel they can speak up, express concern, and make mistakes without facing punishment or ridicule, they can think freely and creatively, and are open to taking risks 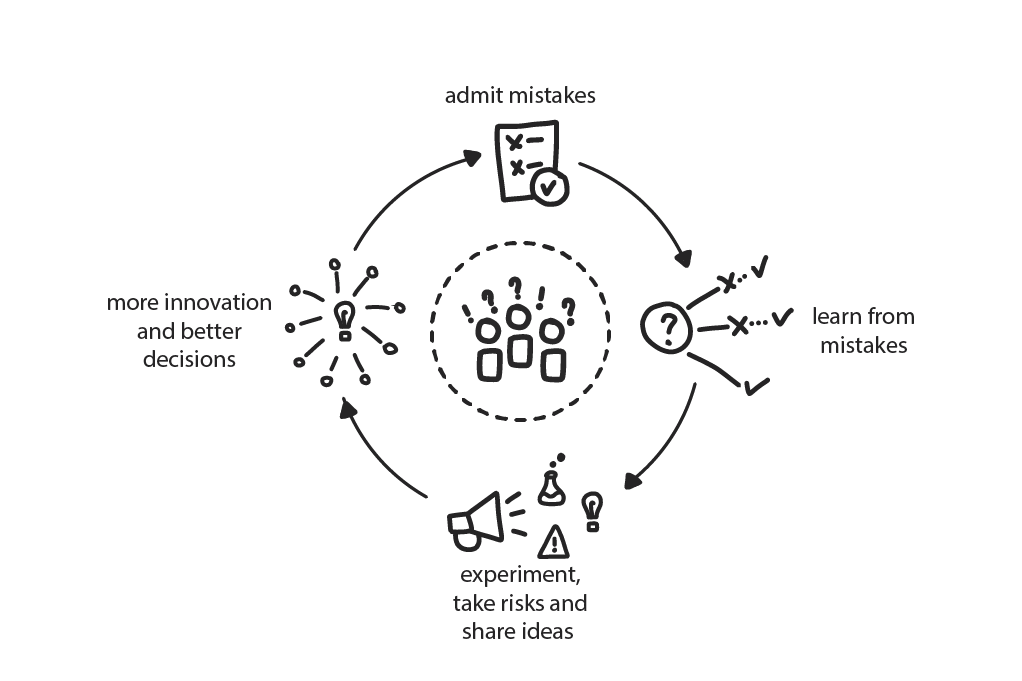 A company is about to embark on a complex journey toward cloud native. The path is uncertain and strewn with problems that the team has never encountered. Theteam needs to take a collaborative problem-solving approach, learn together, and push one another to think creatively.
‍

In This Context
‍
In traditional enterprises that are mostly designed to support stability, people fear exposing themselves by asking a “stupid” question, suggesting a “crazy” idea, or giving difficult feedback to a teammate, let alone a manager. All such actions typically are dismissed and ridiculed or, even worse, punished.In such an environment people tend to keep their ideas to themselves until they’re fairly certain they will be welcomed by others. That means the best and newest ideas might never have a chance of being adopted. And since many new ideas seem a bit crazy and risky in the beginning, the team never gets a chance to really innovate.
• Experimentation requires honest assessment.
• Fear of failure generates resistance to trying new tools or techniques.
• Many attempts to discover new things will fail.
• In hierarchical organizations, people at all levels tend to hide information that could be harmful for their own careers.
• If teams lack the ability to fail safely when experimenting, they must waste time analyzing all future outcomes to minimize exposing themselves to risk.
‍

Therefore
‍
Create the shared value that no group member will ever be punished or humiliated for speaking up with ideas, questions, concerns, or mistakes.In the workplace, psychological safety among teams means that the members believe they can express ideas, concerns, or mistakes without being punished or humiliated for it. As a result, they are willing to express new or different ideas, even if they diverge from overall group opinion. When we feel safe, we become more open minded,resilient, motivated, and persistent. A sense of humor is encouraged, as is solution-finding and divergent thinking—the cognitive process underlying creativity.This creates the confidence necessary for trying and failing and then trying again. Italso shuts down time-wasting risk-avoidance behaviors like trying to find a solution that is absolutely going to work before you even start trying it out. In cloud nativethat solution does not even exist, anyway.
• Many discoveries look odd and “stupid” at first glance.
• In an environment with high trust, people will feel confident in speaking up.
• Creativity occurs much more often in high-trust environments.
‍

Consequently
‍
People can propose new methods or approaches knowing that their ideas will be treated respectfully.
+ Team members can put forward “wild and crazy” ideas without fear of shaming or embarrassment.
+ Even when experiments fail, learning from them via Blameless Inquiry feeds further improvements.
- Creating psychological safety in an organization requires intentional investment of time and effort.
‍